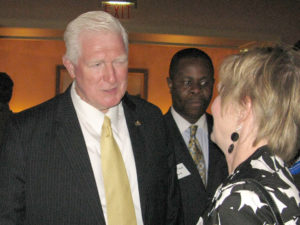 Congressman Jim Moran, who has heretofore ignored the challengers who hope to unseat him in November, fired the first salvo of his 2010 campaign last night at a forum sponsored by the Alexandria Chamber of Commerce.

“I give these three guys credit,” Moran said wryly in his opening remarks. Having spent ten years as a city councilman and mayor in Alexandria before running for national office, Moran said he “would have never had the gall” to run for congress without local government experience, as his opponents are doing.

The comment garnered a smattering of intended laughter from the buttoned-up crowd at the Pentagon City Ritz Carlton.

Prior to Moran’s question and answer session, Berry and Murray took turns swiping at the ten-term congressman’s policies but largely avoided criticism of one another. Fisher was a full participant in the debate, but his pacifist, pro-tax message did not receive a very warm welcome from an audience full of businesspeople. 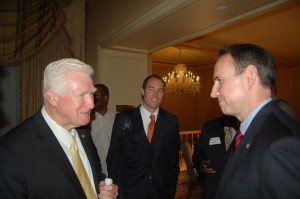 Murray, who named his local campaign organization “Americans for Murray,” played up his 24-year career in the U.S. Army.

“I’m running for congress because as someone who has served in places that don’t have the blessing of liberty, I see we’re heading in the wrong direction,” he said.

“This is not a business as usual year,” Murray repeated several times.

Berry said he wanted to cut the corporate tax rate so America could be more competitive in the world economy.

“When it comes to business, we should adopt a ‘do no harm’ policy,” he said.

As for Moran’s decision not to participate in the debate, Berry, a former top Federal Communications Commission official, was waiting with a broadcast-ready jab.

“Quite frankly, if I had his record, I wouldn’t want to appear on stage with my opponents either.” 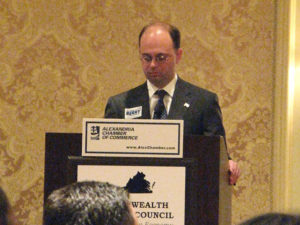 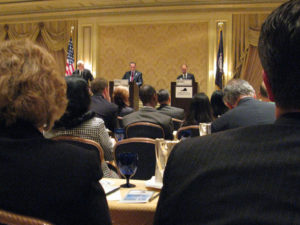