A man was killed this afternoon when he fell nearly four stories off the ledge of an elevated apartment terrace onto a concrete driveway below. Police are still investigating the incident but preliminary reports suggest the fall was accidental, according to Arlington Police spokesperson Det. Crystal Nosal.

It happened just before 4:00 this afternoon at The Prime at Arlington Courthouse apartments (1415 North Taft Street). There were several witnesses who gave statements to police.

A nurse who was near by reportedly tried giving CPR to the man, who was bleeding and unconscious. His body was later taken to a local hospital.

The man was walking several dogs at the time of the incident. It’s not known what role, if any, that may have played in the accident. The dogs are now in the custody of animal welfare officials.

Several people who have commented on this story say the man fell from the apartment complex’s dog park.

One person wrote: “The ledge back there in the fenced-in off-leash area is not very tall, it really could be an accident. Horrible.”

Update at 12:45 p.m. on 5/27 — Police have identified the victim as 29-year-old Arlington resident John Christopher Hamilton.

The Arlington County Police Department’s Homicide/Robbery Unit is investigating a death that occurred on Wednesday, May 26, 2010.

At approximately 3:50 p.m., police and medics responded to the 1400 block of N. Taft Street for a man who had fallen from a roof terrace. The victim was transported to a local hospital where he succumbed to injuries from the fall. He has been identified as John Christopher Hamilton, 29, of Arlington.

The preliminary investigation indicates the victim was attempting to step over a low railing on a rooftop terrace when he fell to the street below.

Anyone who has information about this incident is asked contact Detective Rosa Ortiz at (703) 228-7402. Det. Ortiz can also be contacted via e-mail at [email protected] 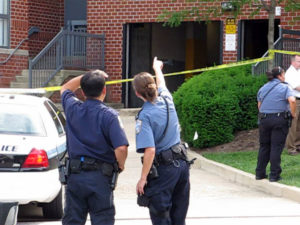 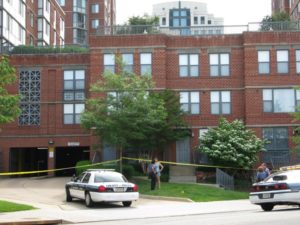 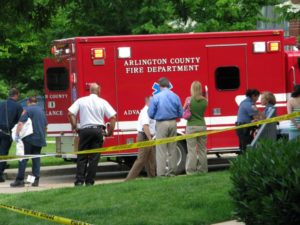 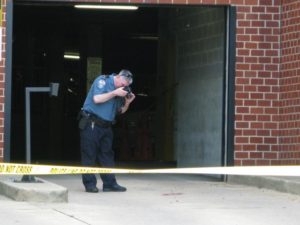