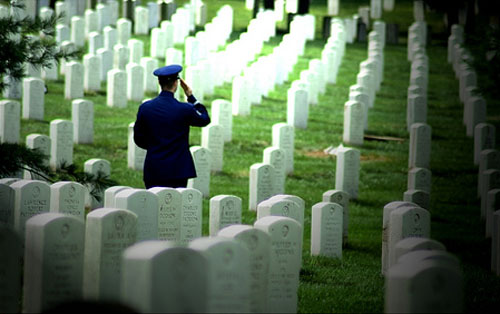 The annual Memorial Day weekend tradition of “Flags In” will take place from 4:00 to 7:00 tonight at Arlington National Cemetery. A group of service members from each branch of the armed forces will place small flags in front of each of the cemetery’s more than 250,000 graves.

The time-honored tradition of “Flags In” at Arlington National Cemetery is scheduled to begin after funerals are complete for the day on Thursday, May 27.

Soldiers from the 3rd U.S. Infantry Regiment (The Old Guard) will be joined by service members from the U.S. Marine Corps Ceremonial and Guard Company, U.S. Navy Ceremonial Guard, U.S. Air Force Honor Guard and the U.S. Coast Guard Ceremonial Honor Guard in placing small American flags, known as grave decorating flags, on the gravesites of all who rest at Arlington National Cemetery for the Memorial Day weekend.

“Flags In” has been conducted annually since the 3rd U.S. Infantry Regiment (The Old Guard) was designated as the Army’s official ceremonial unit in 1948. Flags are placed one foot in front and centered before each headstone in the cemetery. Flags will also be placed at the Tomb of the Unknowns by the Tomb Sentinels and at each of the cemetery’s columbarium courts.

While no volunteers are needed to assist the Old Guard with this sacred duty, visitors are welcome to come and pay their respects during this event and are encouraged to arrive at the cemetery after 4 p.m. on Thursday, May 27. It will take approximately three hours to place the more than 250,000 flags. Parking is available in the Visitors Center parking lot.

All flags will be removed on Tuesday, June 1 before the cemetery opens to the public.