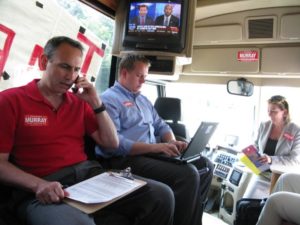 Republican congressional candidate Patrick Murray may be a 24-year veteran of the U.S. Army, but he’s only a three-month veteran of electoral politics. And that doesn’t worry him one bit.

“I think [voters] like the fact that I’m not a politician,” Murray said on Friday, during an interview on board his newly-rented campaign bus. “People talk to me and they say, ‘you don’t talk like a politician,’ and I take that as a compliment because I’m not.”

Murray says his ‘Time to Lead’ bus tour, on which he embarked Thursday and will continue through Tuesday’s GOP primary, is part of an “insurgent ground campaign.” He’s visiting Metro stops, grocery stores, farmer’s markets and other high-traffic spots in an effort to get out the vote.

“We are cautiously optimistic but we’re running like we’re 50 points behind. We’re getting up before dawn and going to bed after dark. Our goal is to get to all 151 precincts in the eighth district.”

Murray may not be 50 points behind, but his fundraising has consistently lagged opponent Matthew Berry, a former general counsel at the Federal Communications Commission. 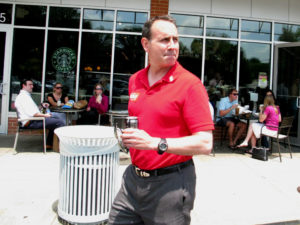 “My opponent has raised a lot more money than I have but he’s raised it from the outside,” Murray said. “He’s definitely the establishment guy.”

“This is a year where we need some maturity, some leadership, and somebody in there who can stand up to both sides and get some things done,” Murray said.

Murray insists that he would have the best shot of defeating incumbent Rep. Jim Moran in the fall — a feat that no Republican has managed since Moran first won the eighth district congressional seat in 1991.

“I feel very strongly with my head and my heart that I’m the best candidate,” Murray said.

Murray and Berry have both emphasized the economy during the course of the campaign, but Murray has adopted a more hard-nosed brand of fiscal conservatism — criticizing the IRS, voicing support for a flat tax and calling for “hard decisions” on entitlement reform.

Both candidates have called for a stronger national security policy, but Murray touts his military experience as evidence that he’s the better man for the job.

Although neither candidate has made social issues a significant part of their campaign, it’s one area where each strays from Republican orthodoxy in one way or another.

On the issue of abortion, Murray has previously said that he’s pro-choice, although he has been vague at times about his exact stance. Berry, by contrast, has declared himself “the only pro-life candidate running for Congress in Virginia’s Eighth District.”

Murray opposes gay marriage and has said that the military’s Don’t Ask Don’t Tell policy should remain in place pending the results of a Department of Defense study. Berry, who is openly gay, supports the repeal of Don’t Ask Don’t Tell and opposes any other discrimination on the basis of sexual orientation.

After Friday’s interview, Murray scanned a list of names and phone numbers prepared by his staff. On the list were veterans who are registered to vote in the eighth district.

Murray took out a cell phone and called a number — something he says he often does between campaign stops to supplement the campaign’s volunteer phone-banking efforts.

“I haven’t had one negative call yet,” he said between rings. 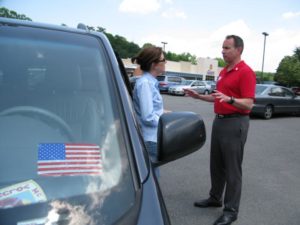 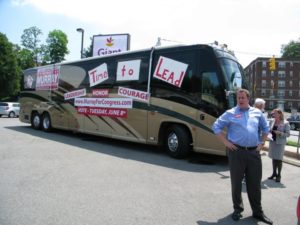