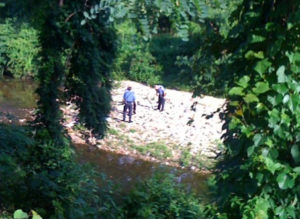 Police had to resuscitate a man Sunday morning after passersby spotted him sitting motionless in Four Mile Run near Shirlington.

The man rolled face down into the creek after officers arrived around 8:00 a.m. As onlookers gathered on the bike path above, officers pulled the man from the water and began performing CPR.

The man was alive when he was taken to the hospital, although his condition is unknown at this time.

Police say they believe he was under the influence of alcohol or narcotics.