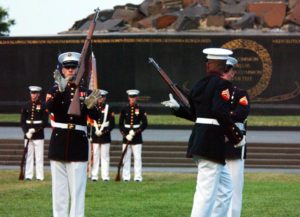 The Marine Corps’ first Sunset Parade of the year starts tonight at 7:00 p.m. at the Iwo Jima Memorial. The hour-long performance features the music of “The Commandant’s Own” Marine Corps Band and a silent precision drill team.

The parade is free and open to the public. Plus there’s plenty of room on the grounds to lay out a blanket for a picnic before or even during the performance.

The Sunset Parades began in 1956, two years after the unveiling of the memorial. The parades are meant as a “tribute to those whose ‘Uncommon valor was a common virtue.'”

The performances will continue every Tuesday though August 17.

Read more →
More Stories
Lost Chaplin Film to Be Unveiled in ArlingtonWhat Do You Call a Group of Trekkies?