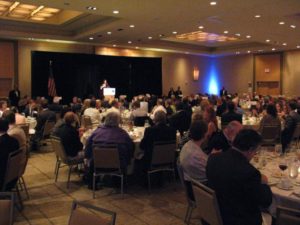 While their national Democratic counterparts face a perfect storm of voter discontent, Arlington Democrats held a pep rally of sorts on Saturday, in the form of their annual Jefferson Jackson Dinner.

In the ballroom of the Westin Arlington Gateway hotel in Ballston, elected officials and party donors had a chance to reassure each other that Democrats were fighting the good fight and would eventually prevail against Republican attacks and media pessimism.

There seemed to be little worry that Republicans may start winning local elections in Arlington, where every single local elected office is held by a Democrat or a Democrat-endorsed candidate. Rather, the main concern of the night’s speakers seemed to the erosion of public support for the Obama administration. That, and the poor state of the Arlington County Democratic Committee’s copy machine.

Rod Snyder, a former American Idol semi-finalist and current Acting President of the Young Democrats of America, kicked off the dinner portion of the evening by singing the National Anthem. Then, as the approximately 175 guests in attendance finished their salads, the speeches began.

At a time when local Republicans are pushing for a change to Arlington’s form of government, ACDC Deputy Chair Maureen Markham praised Arlington as a well-governed community and a stronghold of progressive ideals.

“It takes good government to make a good life for our community,” Markham said. “In Arlington, we really do have a good government. We’re also fortunate because we have elected officials who aren’t afraid to be Democrats.”

“Arlington Democrats lead the national Democratic party in activism and in progressive commitment,” echoed keynote speaker Rep. Jim Moran. “Largely because of you, Arlington has soul.”

Ward Armstrong, Democratic leader of the Virginia House of Delegates, had plenty of praise for Arlington’s state lawmakers, who comprise fully ten percent of the state Democratic caucus.

He called Del. Bob Brink “one of my closest friends” and said of freshman Del. Patrick Hope, “it is a privilege, sir, to serve with you.”

Armstrong also had some complimentary words ready for Moran.

“If I had Jim Moran’s hair, I’d be governor,” Armstrong joked. “I think it’s insured by Lloyds of London.”

Along with the praise for Democrats, of course, there was criticism of the other party.

A quote from Karl Rove was greeted by hisses. Virginia Attorney General Ken Cuccinell’s name was mentioned by three different speakers, with each mention followed by even louder hissing. Armstrong called Cuccinelli “the gift who keeps giving,” based on his ability to polarize state Democrats. 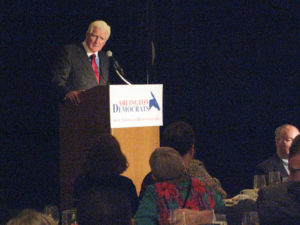 Rep. Jim Moran, who is up for re-election this year, took aim at the media, particularly at talk show hosts.

“The coming election presents a real challenge because the hate radio hosts, led by Glenn Beck and Rush Limbaugh and Sean Hannity and Michael Savage – all these despicable people – they’re very successful in scaring a lot of folks into believing all kinds of outrageous things about what the president and what the Democratic majorities in Congress are trying to do,” Moran said.

“In the last year and a half, we have worked to mop up the mess that eight years of Republican rule created,” Moran said emphatically. He suggested that the current economic crisis was caused by a lack of financial regulation under President Bush and said that the Gulf oil spill was precipitated by a lack of oversight by the Bush administration.

“It’s the worst ecological disaster in history,” he said of the spill. “People aren’t going to blame the people responsible; they’re going to blame the administration. All the yokels I see on the talk shows, they say ‘oh, is this Obama’s Katrina?’ Are you kidding? What do they want him to do, put a Scuba suit on and dive down and plug the well? He’s doing everything he can.”

“It’s amazing what has happened since this country elected Democratic leadership,” Moran said. “The fact is, President Obama has done what he promised to do, and we need to get that message out over the Republican disinformation campaign.” 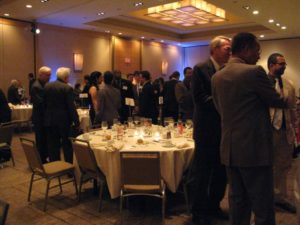 Although discussion of larger state and national issues took center stage, the needs of the county Democrats were not forgotten. Guests were asked to help support the re-election campaign of County Board Vice Chairman Chris Zimmerman, who was in attendance. Donors, who paid between $100 and $250 for tickets to the dinner, were also asked, on two separate occasions, to participate in a raffle that would help fund a replacement for ACDC’s aging copy machine.

Chairman Mike Lieberman highlighted ACDC’s work, noting that the committee will be engaging in its largest ever summer voter identification drive this year.

“We’ll be knocking on doors and asking voters what’s important to them,” Lieberman said.

The night started out with a VIP reception that featured Sen. Jim Webb and former Virginia gubernatorial candidate Terry McAuliffe. Neither stuck around for the dinner (Webb had a PTA meeting). Another notable dinner no-show was state Sen. Mary Margaret Whipple, who was celebrating her 50th wedding anniversary with husband Thomas.