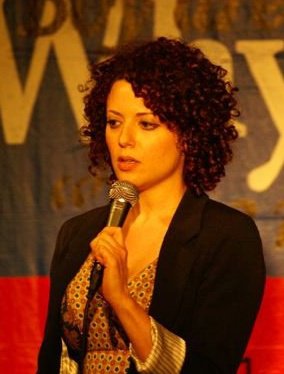 It makes sense that comedians would want to migrate here. We’re funny. Just look at our crime reports.

ARLnow: So how do you decide whether something is funny?

Jessica Brodkin: I think there are a couple of things:

It’s also usually something that’s true about me. My punch lines aren’t true, but when my set-ups are true it comes from a sincere and genuine place. So when I give the punch line, the laugh is greater because it comes from somewhere real.

I’m a performer and I want to connect with the audience. It’s important to be honest, I don’t like doing insult humor. I want everyone to feel happy.

AN: What about hecklers?

JB: I definitely have to deal with hecklers. I think the majority of hecklers are the ones that are really drunk, but you have to make fun of them to make them shut up. I had the worst heckler on Wednesday, because if you can’t put them in their place, if they won’t just settle down, you have to ignore them.

I’ve been mostly lucky that I’ve had sets that I haven’t heckled. It’s like working out — working sh–ty rooms and not getting thrown off. It makes you a better comedian.

AN: So what do you think is hilarious?

JB: My sense of humor is really personal and really dark. Hilarity is really social commentary of the worst kind and laughing at the terrible things that happen.

Last night we [Red Dragon] ended up talking about human trafficking — we were at a fruit stand, then trafficking babies in watermelons. Then we were a couple at Costco and the watermelon started crying. It’s touching on the darkest side of humanity, and the greatest part of humanity.

My improv group is three girls, and we talk about pregnancy and sex and babies a lot… things that touch upon absolutely everyone. We also like making fun of religion a lot — irreverent, but at the same time I really just love social commentary.

AN: Tell me about Ludmilla and Arlington Late Night. What inspired that character?

JB: We had two episodes and I got on the second episode. I’m of Russian descent — I’ve been making fun of Russian immigrants since I was a kid in New York. I’m in another web series with a couple of comics in New York. We created something called Uncle Vania. It’s very dark, it’s very dirty, it’s REALLY dirty, I haven’t shown my parents yet. It’s talk about sweatshops and incest and… *laughs* it’s so dark, so dark.

I just came on board two weeks ago and had three days to write topical jokes for Ludmilla.