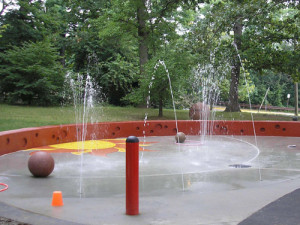 With temperatures hitting 102 degrees in Arlington this afternoon, it would be a perfect day for kids to cool down at the spray park in Shirlington’s Drew Park. Unfortunately, due to budget cuts that took effect last week, the park is now closed on Tuesdays.

Tomorrow, as temperatures again climb toward the triple digit mark, the water will be shut off at Hayes Park, on North Lincoln Street near Clarendon. On Thursday, the county’s third spray park — Lyon Village Park — will go dry.

“Our FY2011 budget cuts included closing each spray park one day a week between Memorial Day and Labor Day,” Parks Department spokesperson Susan Kalish said in an email. “The good news is that there are at least two spraygrounds open in the County on any given day.”

In addition to cutting three days from the spray park schedule, the budget also included a reduction in hours. Formerly, each park was open from 10:00 a.m. to 8:00 p.m. during the summer. Now, the parks are open from noon to 5:00 p.m. Monday through Thursday, and noon to 8:00 p.m. Friday through Sunday.

Some people question the wisdom of cutting morning hours.

The cuts will collectively save the county $20,000 in water costs per year.