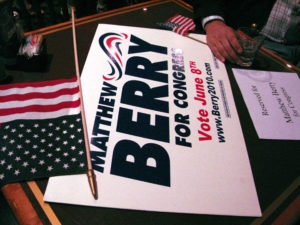 One month after an otherwise low-key primary ended with a smoldering intra-party controversy over a last-minute mailer, former GOP congressional candidate Matthew Berry is calling on supporters to “move on.”

Speaking at a recent Arlington County Republican Committee meeting, Berry — whose narrow loss to retired Army colonel Patrick Murray surprised some local political watchers — said it’s “very important” for the party to unite with the goal of retaking control of congress. But while he said that Murray “deserves our respect,” Berry stopped short of endorsing Murray or pledging to help his campaign.

Murray, who will face incumbent Rep. Jim Moran in November, seems eager to put the controversy behind him. (For the record, he says he “would very respectfully but strongly disagree” that his campaign’s controversial mailer tried to exploit the fact that Berry is gay.)

Murray met personally with Berry last week in an effort to smooth things over.

“Matthew acknowledges who our adversary is, and our adversary is Jim Moran,” Murray said. “We’re both on the same sheet of music strategically, which is to turn around congress.”

With the primary behind him, Murray says his primary focus is to win over independents and moderate Democrats. Still, he realizes there is some work to be done if he wants Berry supporters to do more than just vote for him. 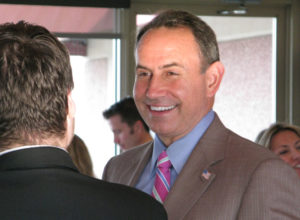 “I’m sure there were some raw feelings right after the [election], and that’s to be understood,” Murray said. “People pour a lot of energy and emotion into campaigns… and I respect that. I just hope that moving forward we can harness that energy together and move forward against our common adversary.”

Murray will need to raise a lot of money — quickly — in order to be competitive with Moran, who already has $527,348 cash on hand, according to OpenSecrets.org.  That fundraising will be especially hard if the 6,651 Republicans who voted for Berry are reluctant to open their wallets and donate their time to Murray’s campaign.

Mike Lane, Murray’s interim campaign manager and the only nominated Republican to win an election in Arlington in a generation, says fundraising will be the campaign’s biggest challenge. Lane says he’s confident that voters will respond to the campaign’s message, which will be heavy on fiscal issues and light on social issues.

“You have to make the case that the incumbent, or the monopoly party, is not getting the job done,” Lane said. “I think it’s going to be an easy case to make. The question is: will we have the resources to reach the number of people that will be able to listen to it.”

“Fundraising has gotten diametrically better” since the primary, Murray notes. He expects to get another boost from some of the state’s Republican luminaries, who have pledged their support.

“They believe that this year, all bets are off,” Murray said. “I am excited and very optimistic about the chances we have.”