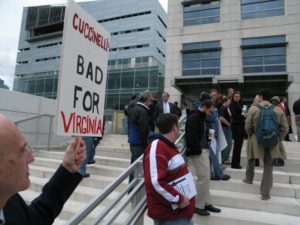 Virginia Attorney General Ken Cuccinelli’s recent actions make the state look “small and backward,” Jay Fisette said to the 70 protesters who gathered on the steps  outside the George Mason University School of Law in Clarendon Tuesday.

They were there — in the words of organizer Cathryn Oakley — to “send Attorney General Cuccinelli a message.” That message: discrimination on the basis of sexual orientation is wrong, no matter how you interpret the law.

“This is about our right to life, liberty and the pursuit of happiness,” said Fisette, chairman of the Arlington County board and Virginia’s first openly gay elected official.

Cuccinelli, a graduate of GMU law, was at the school to speak to a group students. He entered the building through a back door, away from the protest. 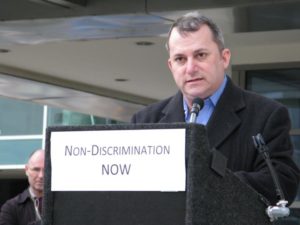 “Welcome to March Madness, Cuccinelli-style,”  Ebbin told the crowd . “We’re here to call Ken Cuccinelli on his fouls… no Virginian has been so out of touch with the realities of the 21st century.”

Cuccinelli later told ABC7 that he is doing what voters elected him to do.

“I got more votes than anyone ever running for AG in Virginia history,” Cuccinelli said in the interview. “People of Virginia knew what they were getting when they elected me.”

More photos and raw video of some of the speeches, after the jump. 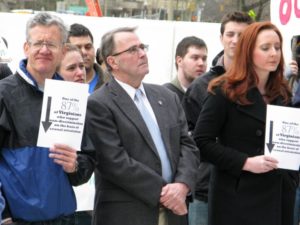 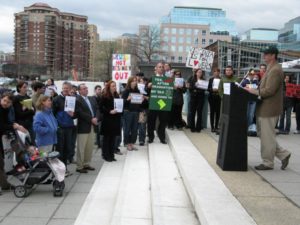 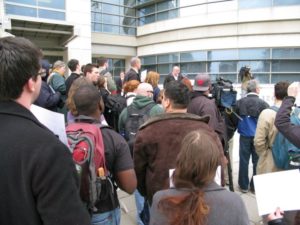 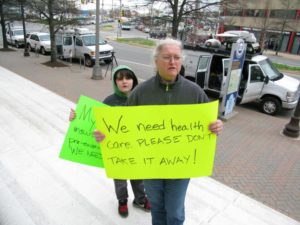