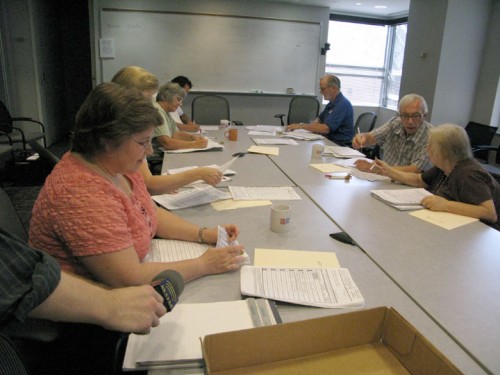 Update at 10:05 a.m. — An additional 54 petition sheets have just been submitted to the county clerk’s office, and another batch may be on the way, we’re told.

Update at 4:00 p.m. — The county clerk has received a final batch of three petition sheets. Applying the average number of signatures per sheet from the initial batch, the 57 sheets submitted today should yield about 1,254 signatures, for a rough total of 16,736 signatures submitted. That’s 2,385 more than the 14,350 signatures required by law. The big question going forward: will it be enough to make up for the inevitable number of invalid signatures?

Update at 4:15 p.m. — Committee for a Better Arlington representative: “We’re very happy with the number [of signatures] we turned in today and we’re looking forward to being on the ballot in November.”

Update at 5:00 p.m. — Statement from the Coalition for Arlington Good Government, which opposes the change-of-government proposal: “CAGG has confidence in the Registrar’s ability to complete this step in a thorough, accurate manner. If the proposed referendum gets on the ballot, CAGG remains committed to ongoing voter education efforts. CAGG looks forward to continuing a community dialogue about how to promote good government in Arlington.”

Arlington County election personnel are conducting an initial count of signatures on change-of-government petitions. A total of 704 double-sided petition sheets were submitted to the county yesterday morning.

The initial count should be completed within an hour. Change-of-government supporters have told the county to expect another batch of petitions to be submitted by the end-of-the-day deadline.

After the deadline, county workers will begin the monumental task of verifying each name by hand. That is expected to take until August 9 or 10, said county registrar Linda Lindberg.

Despite earlier talk of bringing in elections personnel from other jurisdictions to help out, Lindberg said she expects to be able to complete the verification with existing staff members.

The last time a petition made its way through Arlington was 1993.

Actually, there were two petitions. One was to change the school board from an appointed body to an elected body. That measure would ultimately be approved by voters in a referendum. Another proposal, which received enough petition signatures but ultimately not enough referendum votes, was to allow off-track betting parlors in the county.