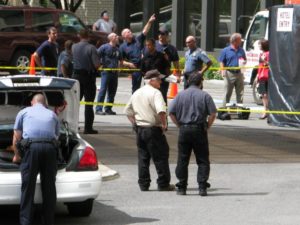 A worker has fallen to his death at the Arlington Court Suites Hotel in Courthouse. The incident is being investigated as an “industrial accident,” according to Arlington police spokesperson Det. Crystal Nosal. It is the second death from a fall in Arlington in as many days.

The worker fell seven stories, through a glass atrium and into the hotel’s front lobby. No word yet on how the worker fell, but ironwork appears to have been underway on four balconies above the atrium.

A pickup truck from Newington, Va.-based Hallmark Iron Works was parked outside the hotel.

“Out of respect for the family, we will offer no comment,” said a woman who answered the phone at the company’s headquarters.

Police say the victim was a 35-year-old man. Co-workers told WUSA9 that he was a new father. They also said that the man’s safety harness had been bothering him today, and that he was apparently not tied in.

The Occupational Safety and Health Administration is investigating the incident.

WARNING: Readers may find some photos (after the link) disturbing.

END_OF_DOCUMENT_TOKEN_TO_BE_REPLACED

More Stories
The Future Crystal City: A Vision of ‘Manhattan on the Potomac’ Realized?Nordstrom Rack Coming to Pentagon Centre