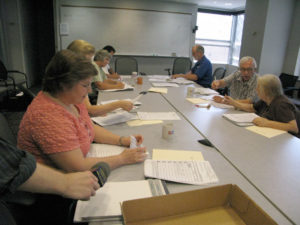 Start writing the eulogies now. The effort to change Arlington’s form of government has failed to attract enough petition signatures to get on the November ballot, ARLnow.com projects.

As of 2:30 this afternoon, election officials had counted 12,621 signatures, out of the 14,350 required by law to get a referendum on the ballot. Election staff are nearly finished with their “second pass” through the 761 petition sheets submitted by the Committee for a Better Arlington. A third pass is unlikely to yield a significant number of additional signatures.

Arlington County General Registrar Linda Lindberg says her staff has completed their second pass over about 700 petition pages. Since about 10,200 signatures were validated during the first pass, that means the second pass is, on average, validating 3.5 additional signatures per page. But with only 61 pages to go, it’s likely that the petition will only have about 12,900 valid signatures going into the third pass, which is expected to start Monday.

“I’d be surprised if we pick up another 100” signatures during the third pass, Lindberg said. With those 100 additional signatures, the petition will be more than 1,350 votes short. This spreadsheet shows just how improbable it would be for the petition to reach the magic 14,350 number from this point out.

It’s not clear what the next step will be for the Committee. In an phone interview last week, a CBA representative did not rule out the possibility of some sort of legal action.

“We’re going to wait for the Registrar to do their count,” the representative said. “Once they make that announcement we will proceed accordingly.”

The Sun Gazette reported this morning that a judge will ultimately rule on whether the measure will make it onto the ballot. No mechanism for appeal exists under state law once the judge has made a decision.

The real question this point is actually how the petition’s failure will affect this year’s county board race between board vice-chairman Chris Zimmerman, Republican Mark Kelly and Green Party candidate Kevin Chisholm. Had the change-of-government referendum made it on the ballot, local Democratic dollars would have poured into the coffers of the Coalition for Arlington Good Government, the organization created to oppose the effort. That could have diverted money that would have otherwise gone to Zimmerman’s campaign.

On the other hand, opposition to the referendum could have driven Democratic turnout in November, in a year when Republican turnout is likely to get a boost from dissatisfaction with the current administration.