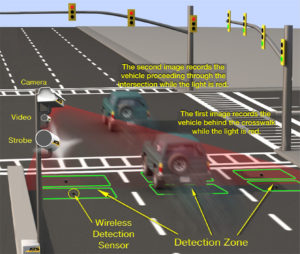 “There is no doubt that it’s all about the money,” the Washington Times says about Arlington’s new red light cameras.

In an editorial — who knew the Times still covered local issues? — the paper claims the combined “angle collision” rate at the four intersections where cameras are installed is a mere 0.15 incidents per month.

So, is it about the money? No, police say: it’s about safety, not profit.

But the month-long trial period suggests that Arlington will likely generate revenue from the program.

A total of 577 warnings were issued in the past month. If that rate remains constant while the system issues $50 citations, it will generate $346,200 over 12 months. Arlington pays $178,800 per year to the contractor that maintains the camera system. That leaves a surplus of $167,400. Of course, a significant percentage of that will be paid to the contractor as ticket processing fees (we’re guessing half).

Somehow, though, it seems unlikely that a sinister revenue-generating plot was hatched over a sum that would barely pay the salary and benefits for one additional beat officer.