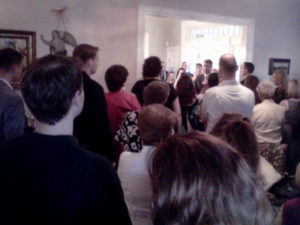 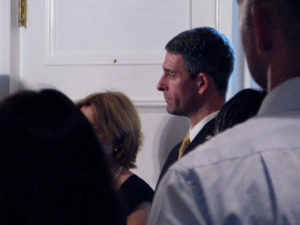 Cuccinelli declined to discuss his controversial lawsuit against the federal government over the Obama health care reform law, but he had plenty to say about Murray’s opponent and the Democrats’ record on the economy.

Moran does not provide “the kind of leadership the Founding Fathers had in mind,” Virginia Attorney General Ken Cuccinelli told the crowd of about 75 supporters. But “in Patrick Murray, you have a better alternative.”

Cuccinelli warned of the dangers of unchecked deficit spending and spoke of the need for pro-business policies.

Murray praised the Republican leadership in Richmond for managing to eke out a budget surplus in a weak economy. He blasted Moran for telling MSNBC’s Chris Matthews that “the economy has recovered.”

“The politicians in Washington, DC — they don’t listen to us,” Murray said. “People are tired of $13 trillion in debt.”

Murray said Cuccinelli would be back to help his campaign in the fall. Murray, who has lagged in fundraising, has held events with two major statewide figures — Cuccinelli and former governor George Allen — in the past two weeks.

END_OF_DOCUMENT_TOKEN_TO_BE_REPLACED

More Stories
CAGG: Thousands of Petition Signatures May Be InvalidTo Do Tonight: Reception for Dogs