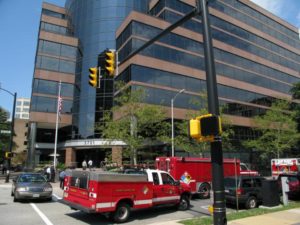 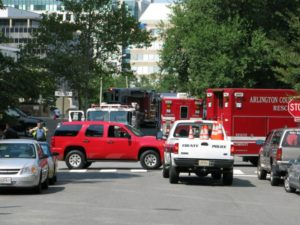 The fire department is on the scene at the headquarters of the Defense Advanced Research Projects Agency in Virginia Square for a report of strong gas fumes in the parking garage.

Initial reports suggest two people who were in the garage are now being treated after feeling lightheaded.

Parts of North Nelson Street and Fairfax Drive are shut down due to the large Hazmat response.

Update at 11:25 a.m. — Firefighters are investigating the incident as a possible gasoline leak from a vehicle. Some of the units are now leaving the scene.

A Hazmat team from Alexandria was part of the response.