(Updated at 11:40 a.m.) Firefighters are on scene of a large gas line rupture near Rocky Run Park, in Courthouse.

Initial reports suggest that a 3-inch natural gas line was accidentally struck by construction workers near the intersection of N. Barton Street and 11th Street N.

Those and other nearby streets are being blocked by police. A large fire department response and Washington Gas crews are now on scene.

It may take an hour or two to fully shut off the gas due to the size of the ruptured line requiring more personnel to secure it, according to scanner traffic.

Firefighters are in the process of evaluating whether any nearby buildings will need to be evacuated.

#UPDATE – @washingtongas has arrived on the location, they are estimating at least 1-2 hours to have the gas shut down. Fire Department units will remain on scene until the gas is secured. No hazards have been located in any surrounding buildings. 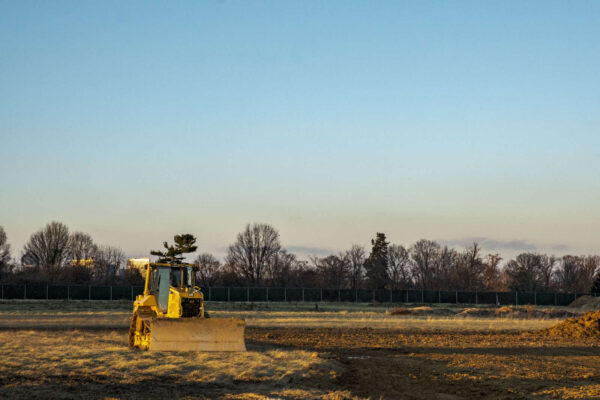 Local Home Sales, Prices Up — “The average price of a detached, single-family house that sold in Arlington County, Virginia, in December was $1,258,648. That is 17% more than the average price a year earlier, according to the Northern Virginia Association of Realtors.” [WTOP]

More Water Main Breaks — From Arlington DES: “An unusually intense winter has triggered an above-average number of water main breaks, often during the cold, dark early morning when most people are asleep. Saluting the folks who respond. They’re not in it for the glamour. #TheOtherFirstResponders.” [Twitter]

Larry Finch Plaque Likely Coming to Zachary Taylor Park — “The proposal emanated from the Donaldson Run Civic Association to honor Finch (1933-2020), who lived in Arlington from 1966 and 2013 and was active in civic affairs – especially in the parks and ecological arena – for much of that lengthy period.” [Sun Gazette]

Small Business Program Launches — From Arlington Chamber of Commerce: “We are proud to launch our Small Business Accelerator Program, presented by Amazon. As the Presenting Sponsor of this program, Amazon will sponsor half of the membership dues to verified Small, Women and Minority-owned (SWaM) businesses located in Virginia joining the Chamber for their first year of membership.” [Twitter]

All lanes of Columbia Pike are blocked due to a large gas leak.

The leak is along the Pike near S. Scott Street and a number of large apartment buildings. Police, firefighters and Washington Gas crews are on scene, repairing the leak and checking nearby buildings for elevated levels of natural gas.

The road closure is affecting several bus lines, including Metro and ART buses.

“Due to emergency utility repairs, Columbia Pike is closed between Quinn St. and S. Walter Reed Dr,” said Arlington Transit. “ART Routes 42, 45 & 74 will be on detour until further notice.”

Units operating at the scene of an outside natural gas leak at Columbia Pk / S Rolfe St. Expect a large FD presence and please avoid the area. pic.twitter.com/80rDfefyJW

Huffpost Calls Arlington GOP Tweet ‘Racist’ — “In a racist tweet Monday that was promptly ratioed into the shame museum, the Arlington County Republican Committee in Virginia suggested that two Democratic congresswomen of color should retire and go work as lobbyists for the Taliban… ‘This tweet isn’t about race ― it’s about the Squad’s constant support for anti-American sentiment abroad,’ the Arlington GOP tweeted.” [Huffpost]

Local Nurse Lauded for Covid Candor — “An Arlington woman who continues going above and beyond to help her community throughout the pandemic is being nominated for a community hero award from her fellow neighbors.” [WJLA]

Restaurant Recs for Those With Kids — “Going out with kids is complicated enough — finding dishes for picky eaters, hoping they will sit still long enough to finish their food and not terrorize other tables, praying you can relax for five minutes… These restaurants are going out of their way to create a welcoming, inclusive and safe dining environment for families, with outdoor dining and child-pleasing choices.” [Arlington Magazine]

(Updated at 4:25 p.m.) Two women were rescued by firefighters this afternoon in dramatic fashion, after a gas leak was discovered in their home along Columbia Pike.

The rescues happened shortly before 3:30 p.m., after police were called to the house at the intersection of the Pike and S. Rolfe Street for a welfare check.

“Officers were conducting a check on the welfare. When they made entry to the residence they smelled gas, and called for the fire department,” said Arlington County Police Department spokeswoman Ashley Savage. “Two adult females have been transported to local hospitals.”

Initial reports suggest that firefighters searching the house found the victims inside suffering from possible carbon monoxide poisoning. They were pulled outside and treated before being rushed to the hospital.

So far there’s no word yet on the condition of the two victims.

A neighbor tells ARLnow that “two lovely [older] ladies” live in the home.

“God, I hope they are okay,” said the neighbor, who did not provide her name.

#Alert Units are on scene of a gas leak inside a residence in the 1800blk of Columbia Pike. Two patients were found and transported to a hospital. Columbia Pike remains partially blocked. Media staging at the scene can contact @ArlingtonVaPD for more information. pic.twitter.com/RfVFQygHeh

Matt Blitz contributed to this report. Map via Google Maps.

(Updated at 5:30 p.m.) Residents have been evacuated from homes in the Rock Spring neighborhood due to a “major outside gas leak.”

Initial reports suggest that workers digging up part of Williamsburg Blvd struck a large, 12-inch gas line. A crew from Washington Gas is on scene working to stop the leak.

“Residents closest to the leak will be evacuated,” the Arlington County Fire Department said. “Only evacuate if required to do so by firefighters.”

#Alert: Multiple units are on scene of a major outside gas leak in the 5100blk of Williamsburg Bl. Residents in the area will smell an odor of gas. Residents closest to the leak will be evacuated. ONLY evacuate if required to do so by firefighters. @washingtongas is on on scene. pic.twitter.com/1BezkzMKJb 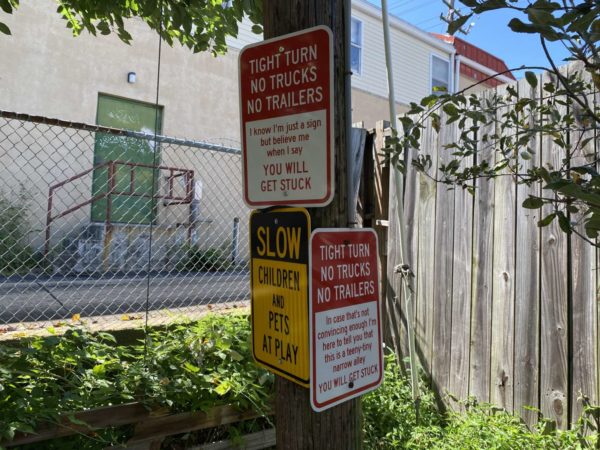 AIM to Spotlight Arlington’s Black Community — “In 2018, Arlington native Wilma Jones published a book about the neighborhood she grew up in. My Halls Hill Family: More Than a Neighborhood details the evolution of a community of freed slaves, which was founded after the Civil War… Jones and Arlington Independent Media (AIM), a nonprofit organization, are launching a multi-part series called UNTOLD: Stories of Black Arlington.” [WDVM]

Interview with Interim Police Chief — “After 29 years with Arlington County, Virginia, Police, Deputy Chief Andy Penn knows a concerning trend when he sees one. Just weeks before moving into the role of interim chief, Penn said addressing an uptick in deadly overdoses was an immediate focus. As of Aug. 18, the county had lost 16 people to overdose deaths, according to Arlington County police data.” [WTOP]

Flu Vaccines Now Available at Giant — “Giant Food announced Monday flu shots are available at in-store pharmacies, including locations in the Arlington area. The flu vaccines are administered by Giant pharmacists and do not require an appointment. A copayment is usually not required through most insurance plans.” [Patch]

Here’s Why Glebe Road Was Closed — “For those wondering, Glebe was blocked just north of Ballston [Sunday] night due to a vehicle that rammed a house’s gas meter, causing a leak. No injuries were reported, some nearby homes were briefly evacuated, per ACFD spokesman.” [Twitter]

Storms Possible This Evening — “[Monday was] the beginning of a several-day stretch of storm threats. [Today] the Storm Prediction Center has the region under an ‘enhanced risk,’ or Level 3 out of 5. On Wednesday, it’s a slight risk at Level 2. As with tomorrow, damaging winds will be the main threat.” [Capital Weather Gang] 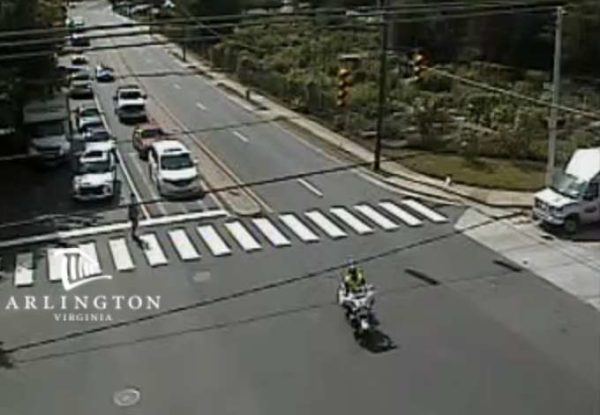 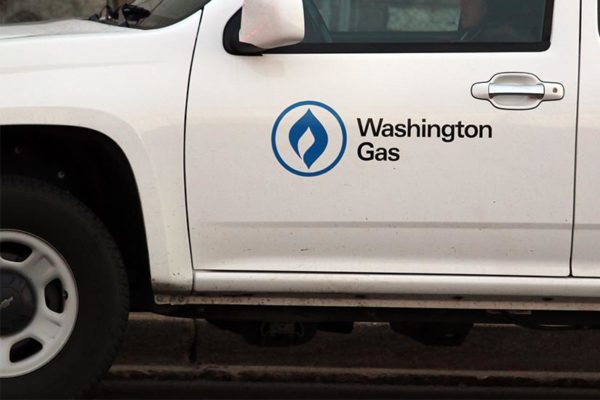 Arlington County firefighters are on scene of a large, outdoor gas leak near Ballston.

A 2-inch gas line was ruptured on the 500 block of N. Pollard Street, ACFD says. Washington Gas is working to shut off the leaking gas line.

At least one local resident says he can smell a “strong” odor of gas in the Ballston and Virginia Square areas.

I assume it’s safe/ok to breathe in? Strong smell in ballston/Virginia Square @ARLnowDOTcom

#FINALUPDATE – gas leak has been isolated and clamped by gas utility. Residual odor may remain for next 30-60 mins. 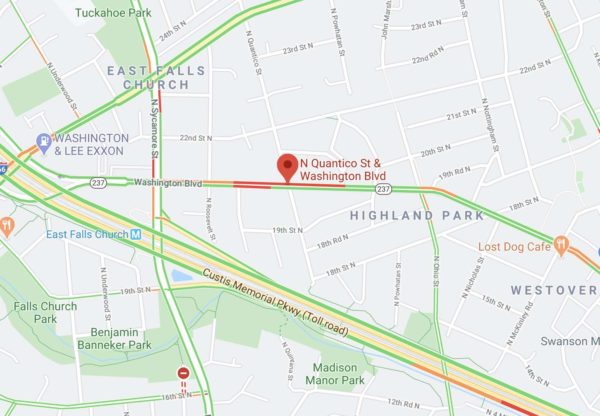 Update at 3:15 p.m. — The road has reopened, Arlington County says.

Earlier: Washington Blvd is closed at N. Quantico Street due to a reported gas leak.

Firefighters and police are on scene of the leak, which was large enough to prompt first responders to block traffic in both directions. The location of the closure is east of East Falls Church and west of Westover.

Drivers are being detoured onto local streets, though traffic volume remains relatively light in Arlington due to the pandemic.

A Washington Gas crew is said to be en route. No word yet on when the road will reopen.

Update on 4/2/20 — The repairs were completed and the roadway is back open.

Update at 4:50 p.m. — Walter Reed Drive is now closed in both directions while crews work to stop the leak and repair the line.

Earlier: The southbound lanes of Walter Reed Drive are blocked due to a significant outdoor gas leak south of Columbia Pike.

The leak was reported shortly before 2:30 p.m., near the intersection of Walter Reed and 11th Street S. Arlington police and firefighters are on the scene.

Initial reports suggest a gas line larger than 2 inches was struck by a construction crew, prompting the closure and extra precautions. First responders are now checking natural gas levels on the ground floor of the adjacent apartment building while awaiting the arrival of Washington Gas.