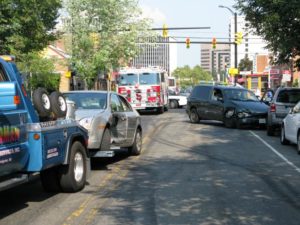 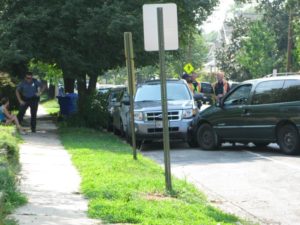 A three-vehicle accident shut down 23rd Street between Fern and Grants Streets just after 4:00 this afternoon.

The collision appeared to involve two occupied vehicles and one parked vehicle. Two people were evaluated by paramedics for minor injuries.

The accident re-routed the Metro buses that usually go up and down 23rd Street. Despite the excitement, happy hour patrons of the nearby strip of bars and restaurants seemed utterly disinterested in the police and fire activity up the street.

As of 4:40, a tow truck had cleared the banged-up vehicles from the middle of the road and 23rd Street was reopened.