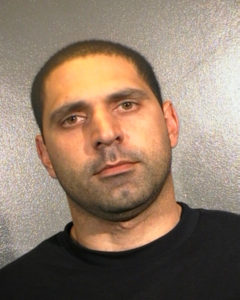 The man suspected in the stabbing deaths of five people was arrested and later released in Arlington last week, the Arlington County Police Department has confirmed.

Elias Abuelazam, 33, was pulled over for a traffic violation on the 1100 block of South Walter Reed Drive early Thursday morning, according to police spokesperson Crystal Nosal. After Abuelazam’s information was run through a computer database, he was arrested on an outstanding warrant for simple assault in Leesburg.

He was booked and a mug shot was taken. A magistrate then released him on his own personal recognisance, police said.

The Washington Post reports that Abuelazam is suspected in a stabbing that occurred in Leesburg later that morning.

Abuelazam was arrested at Atlanta’s Hartsfield Airport last night while reportedly trying to flee to Israel. He is suspected in at least 20 stabbings in Michigan, Ohio and Northern Virginia. Five of those attacks were fatal.

Abuelazam lived in Leesburg as recently as one year ago, according to ABC 7.