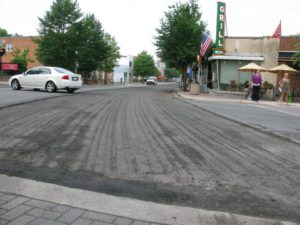 Drivers and cyclists in the Courthouse/Clarendon area should expect a bumpy ride on Wilson Boulevard over the next couple of days. Wilson has been milled between North Barton Street and North Fillmore Street ahead of a scheduled repaving.

The repaving is expected to begin on Thursday, depending on weather conditions and logistical issues.

Drivers should expect parking restriction in the area during the construction.