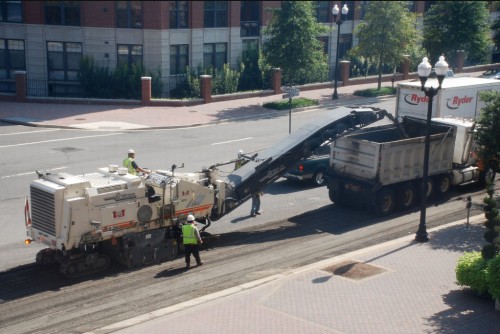 Paving Update — Now that the section of Wilson Blvd near Whitlow’s is paved with smooth blacktop, workers are focusing on Washington Blvd. As of Sunday afternoon, one lane between North Highland Street and Pershing Drive was torn up, awaiting fresh asphalt. TBD reports that the repaving of Washington Blvd will stretch into next week.

Flames Seen From Plane Engine — The Associated Press reports that flames were seen coming from the engine of a US Airways plane landing at Reagan National Airport. The captain of the flight from Charlotte, N.C. declared an emergency but landed without incident. No flames were seen after it landed.

‘Old Guard’ Returns from Iraq — Soldiers from the Fort Myer-based Old Guard arrived back home Saturday night after serving one year in Iraq. More than 120 soldiers from the historic regiment, best known for its ceremonial duties at Arlington National Ceremony and the White House, provided security at an Iraqi prison. More from WUSA9.

Students Return to Marymount U — The familiar sight of parents helping their children move into the dorms returned to Marymount University over the weekend. The school’s incoming class includes a record 440 freshman and a record 335 transfer students. More from the Sun Gazette.