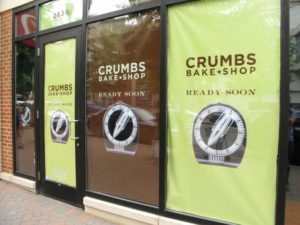 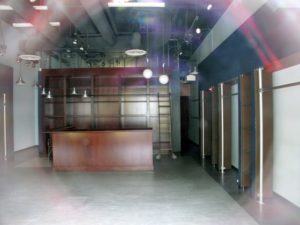 Signs for the new Crumbs Bake Shop are up next to Lululemon and Red Mango on Clarendon Boulevard. Clarendon Culture reports the store is expected to open in December.

The storefront has nearly 900 square feet of space for the popular New York-based cupcakery. According to county records, the store’s initial floorplan calls for 10 indoor seats and no sidewalk cafe.

The new location still hasn’t been listed on the Crumbs web site.

Update at 10:00 a.m. — A Crumbs rep confirms: Opening “by the end of the year.” It seems plausible that the store could open sooner — the company started applying for permits in July.

Update at 2:30 p.m. — Added photos of the exterior and interior. I’m becoming more and more convinced that we’ll see a pre-Thanksgiving opening date.

Update at 2:50 p.m. — Contrary to what Clarendon Culture and ARLnow.com is being told by the company, a Crumbs spokesperson is telling TBD that the Clarendon Crumbs is hoping for a late September or early October opening. This morning, a rep at Crumbs HQ told us it “definitely” would not be open within a month. Sigh.

Update on 9/22 — Crumbs just emailed ARLnow.com to let us know that they’re planning on a mid-November opening.