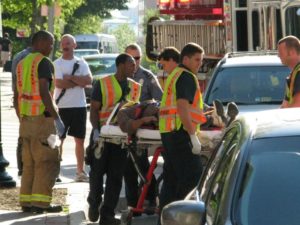 Around 5:30 last night, a cyclist was apparently struck by a vehicle on Clarendon Boulevard in Courthouse, near the new Fire Works Pizza. Bystanders described the accident as minor, but seeing the man loaded into an ambulance was yet another reminder of the dangers bicyclists and pedestrians face on local roads.

In Virginia, 84 people died and more than 2,000 people were injured while walking or biking on roadways last year.

To help reduce risky driver and bicyclist behavior, the state is holding its second annual Bicyclist and Pedestrian Awareness Week, starting on Sunday.

“Lack of knowledge and risky behaviors often leads to crashes between roadway users,” the Arlington Police Department said in a statement announcing its participation in the week-long safety campaign. “Taking time to learn the laws and safety tips can save a life, especially with area schools starting back up and many students walking, cycling and driving on the roadways.”