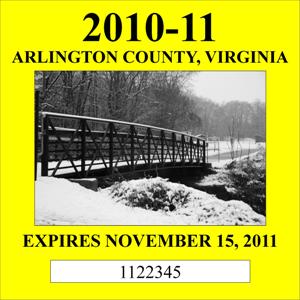 By this time, Arlington residents were supposed to have received about 115,000 vehicle decals and their accompanying 2011 personal property tax bills. But a problem with the printer has delayed the mailings until next week, throwing into limbo County Treasurer Frank O’Leary’s policy, per state law, of getting the bills to taxpayers 30 days before the October 5 payment deadline.

The printer problem wasn’t confined to Arlington. The same printing company is used by at least one other local jurisdiction, we’re told.

In Arlington, the decals must be displayed by November 15, which will give drivers plenty of time. But meeting the October 5 deadline for paying the tax may be more problematic.

“The county is trying to figure out a way to ensure that people have adequate time to pay their bills before any penalties are imposed,” a county source told ARLnow.com. One possibility is waiving the fees for late payments, up to a certain date. (Update: October 15. See below.)

If you don’t want to wait for the bill in the mail, you can pay your taxes online here.

ARLINGTON, Va. – Defective forms have delayed the mailing of some 115,000 personal property tax bills, Arlington County Treasurer Frank O’Leary said today. The problem also affected the cities of Alexandria and Falls Church, all of whom use the same form supplier, Graphic Communications, for their tax bills.

Arlington mailed some 45,000 bills this week, and expects to mail the remaining 70,000 bills next week, O’Leary said. By state law, the bills are required to be mailed no later than 30 days before the deadline for paying them. The County, by ordinance, has established Oct. 5 as the payment deadline for personal property tax.

Due to the delay, the County will only begin to charge penalties on payments received or postmarked after Oct. 15, to ensure ample time for residents to pay their bills.

“It is unfortunate that the bills could not be mailed in a timely fashion this year,” O’Leary said. “We regret this inconvenience for residents and the concern that it has caused.”

O’Leary noted that any additional printing and mailing costs will be borne by the vendor.

“We are glad that a solution has been found that is fair to taxpayers and fair to the County,” said Board Chairman Jay Fisette.