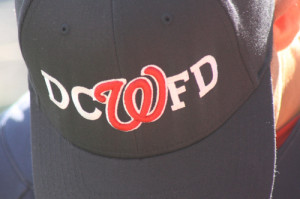 Editor’s Note: This story has been updated with new information that has come to light since it was originally published.

On Saturday, the Nationals held a special ‘Heroes Day’ in remembrance of 9/11. The DC Fire Department was a major participant — DCFD firefighters were on hand, players wore specially-made DCFD hats with the Nationals logo in the center, and Nats general manager Mike Rizzo and catcher “Pudge” Rodriguez were recognized as Honorary DCFD Fire Chiefs.

But the Arlington County Fire Department — the first to arrive at the Pentagon on 9/11 — was not invited.

Fire Chief Jim Schwartz, who led the incident command at the Pentagon for 10 days after the attacks, says the department did not receive an invitation from the Nationals to participate in the ceremony. Nor, to his knowledge, did any of the numerous Maryland and Virginia fire departments that assisted Arlington on 9/11. Instead, Schwartz says he only received a flyer advertising discounted tickets for firefighters, after it was forwarded by a colleague at DC Fire.

“I’m definitely disappointed that there wasn’t more of an outreach on the part of the Nationals organization,” Schwartz said. “I assume they have a communication operation over there that ought to know the lay of the land, and I would put this on them for not reaching out and making some sort of formal invitation.”

He said that despite all the other events ACFD was involved with on Saturday, the department would not have had trouble finding firefighters interested in participating in the Nats’ ceremony.

Schwartz recalled a ceremony at a Redskins game two months after 9/11, which made a point of featuring numerous local fire departments.

“I know that we have taken great pains to acknowledge the assistance of all of those other fire departments,” Schwartz said, while noting that he did not fault the DC Fire Department for taking part in the ceremony by themselves.

“It’s not their job to do the outreach to other departments,” he said.

The Nationals have not returned a call seeking comment.

More Stories
The Music Stops at the Westover Market Beer Garden, For NowSen. John McCain to Appear at Fundraiser for Patrick Murray