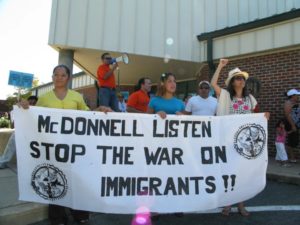 Nearly 100 people chanted slogans, held signs and beat drums outside the Arlington office of the Virginia DMV this afternoon, decrying tougher policies on immigrants enacted in the wake of a nun’s death in Prince William County.

The protesters, many of whom were affiliated with the Laborers International Union of North America and Alexandria-based Tenants and Workers United, were noisy but peaceful. Their hour-long protest was watched closely by a dozen Arlington County police officers.

The demonstrators were protesting two recent actions that they say amounts to a “war and persecution of Virginia’s immigrants.” Last week, Virginia Gov. Bob McDonnell barred the Department of Motor Vehicles from accepting “employment authorization documents,” commonly used by immigrants, as proof of legal residency. Then this week, the U.S. Immigrations and Customs Enforcement Agency revealed a change in policy that will put illegal immigrants charged with DUI on the fast track to deportation. 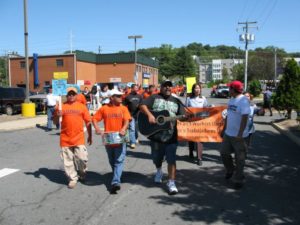 Both policy changes come after a Benedictine nun was killed in a crash that police say was caused by an illegal immigrant who was driving drunk. Carlos Martinelly Montano, 23, was awaiting a deportation hearing on two prior DUI charges at the time of the August 1 wreck.

While calling Sister Denise Mosier’s death “tragic,” organizers of the protest said the crash should not be used to “promote an anti-immigrant agenda that would effectively segregate immigrants from society.”

“Some people are going all out to turn Virginia into the next Arizona,” Tenants and Workers United Suyapa Hernandez said in a statement. “We will not stand for this… we must unite and fight back against policies that divide and weaken our communities.”

“Racist application of the rule of law and state resources is an unfortunate legacy in Virginia politics,” said John Liss, executive director of Tenants and Workers United. “From slave-owners of the old South to the life-long disenfranchisement of ex-felons and recent attempts to… detain and deny immigrants their basic civil rights, we are witnessing the struggle of the dominant class to maintain control as the demographics… in the Commonwealth change.”

As they marched past the doors of the DMV, at 4150 South Four Mile Run Drive, protesters with megaphones shouted slogans in Spanish and men with drums and guitars provided a musical rhythm. At one point, the protesters gathered in front of the building and several people gave short speeches.

“It’s pretty clear that this is a war on the immigrant community,” one protest organizer said. “We are the victims here.”

This was the first of at least four DMV protests that will be held around Virginia. The next protest is scheduled to take place in Richmond one week from today.