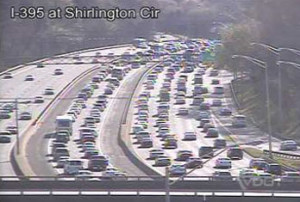 A day after two Virginia legislative leaders — a Democrat and a Republican — sent a letter blasting Arlington’s expensive lawsuit against the planned I-395 HOT lanes project, three members of the Arlington delegation to Richmond have sent a reply.

In subdued, measured language, the letter states support for “properly designed and managed HOT lanes,” but urges the state to “come to the table and negotiate in good faith.” The letter cites “legitimate environmental impact concerns” and “technical issues that must be resolved if the project is to achieve its goal of moving people through the corridor efficiently” as justification for the county’s resistance to the project.

Noticeably absent from the letter is any defense of the lawsuit’s “outrageous claims of conspiracy and racism” that the original letter — sent by Republican House Speaker Bill Howell and Democratic Senate President Pro-Tempore Chuck Colgan — railed against.

The Arlington delegation — Sen. Mary Margaret Whipple, Del. Bob Brink, and Del. Patrick Hope — also avoided reference to the controversial decision to sue four state and federal transportation officials in their personal capacity as part of the lawsuit, which Howell and Colan called a “moral error.”

“We are confident that the Board is not pursuing litigation for its own sake,” the Arlington lawmakers wrote. “We hope that you will use your good offices to urge the Governor and VDOT to come to the table and negotiate in good faith; we will do the same on the local level.”