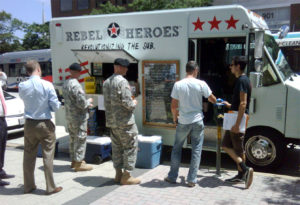 The Rebel Heroes banh mi sandwich truck and the District Taco cart have spent the summer exclusively serving hungry crowds around Arlington. But each has their sights set on licenses to operate in the District.

That’s the explanation for why the popular Arlington vendors were invited by DC government to participate in next week’s inaugural “Curbside Cook-Off” at CityCenterDC.

As the Washington City Paper tells it, District Taco and Rebel Heroes will “stick out like tourists in downtown D.C.” during the two-day mobile food event on Oct. 7 and 8. Also participating will be 18 DC-based vendors, including DC Slices and Sweetflow Mobile, which occasionally slum over to Arlington for special events.

So if our beloved street vendors do get licensed in DC, will we ever see them again?

District Taco says yes — they’ll simply get another cart to operate in DC. We’re still waiting to hear back from Rebel Heroes.