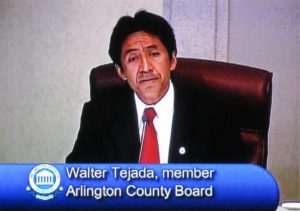 The Arlington County board voted Tuesday afternoon to become the first community in Virginia — and one of the only communities in the country — to withdraw from the federal Secure Communities immigration enforcement program.

Following an impassioned presentation by board member Walter Tejada, and without further discussion, the board voted 5-0 to direct County Manager Michael Brown to formally notify Virginia State Police and U.S. Immigration and Customs Enforcement of Arlington’s intention to withdraw from the program, which Virginia implemented statewide earlier this year.

“This is something that was imposed on Arlington County and other jurisdictions,” Tejada said. “They didn’t ask our opinion, there was no public process.”

“Arlington county remains firmly committed to the protection of civil rights and civil liberties for all people,” Tejada added, saying actions by the state government have created “an anti-immigrant sentiment, regretfully.”

“We’ve had a pattern of measures that seek to score cheap political points on the backs of working immigrants,” he said.

Tejada said Arlington County law enforcement would maintain its current policy of only reporting undocumented immigrants directly to federal authorities in the event of serious crimes. He argued that the Secure Communities program is actually a hinderance to police.

“There are concerns among Arlington County law enforcement and our residents that the Secure Communities initiative will create divisions in our community, and promote a cultural fear and distrust of law enforcement that threatens communities and makes communities less safe,” Tejada said, reading from the text of the resolution.

The resolution also calls on the U.S. Congress to “enact meaningful and comprehensive immigration reform that provides a path to citizenship” for undocumented immigrants.

A crowd that included at least a dozen immigration rights advocates rose to their feet and cheered after the vote. Many hugged and some whistled and threw their hands in the air.

In a joint statement following the vote, Arlington Sheriff Beth Arthur and Police Chief Douglas Scott said that the resolution will not change the way their respective departments enforce the law.

“Our goal remains unchanged – we are here to keep this community safe,” the statement reads. “And to do so, we must rely on strong partnerships and relationships with everyone in our community. We want to make sure that all people – regardless of their country of origin – continue to report crimes and do not fear interacting with Arlington County law enforcement.”