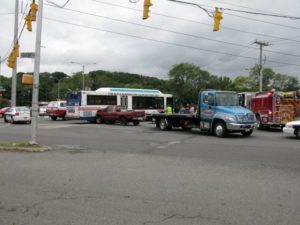 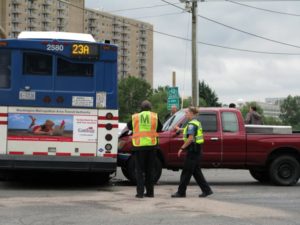 A pickup truck ran into the side of a Metro bus on South Glebe Road near the interchange with I-395, snarling rush hour traffic and sending at least two people to the hospital.

The accident happened at the intersection of South Glebe and West Glebe road around 4:30 this afternoon. Initial reports suggest two children in the truck were brought to the hospital with non-life threatening injuries.

Arlington and Metro Transit Police are on the scene, as are Arlington firefighters and Metro supervisors.

Update at 5:25 p.m. — The bus has been moved to a side street, and a wrecker took away the pickup truck. One lane now getting by on southbound Glebe Road. There’s still some debris in the roadway which hasn’t been cleaned up and traffic is still a bit of a mess.

Update at 6:10 p.m. — A Metro spokesperson says there were no reported injuries on the bus.