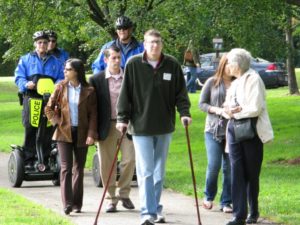 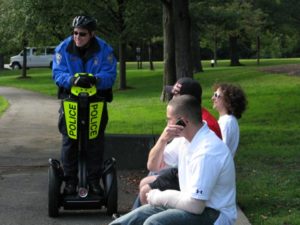 At a ceremony on the grounds of the Iwo Jima memorial this morning, some 50 wounded warriors will receive brand new Segway personal transport vehicles, the reward for “graduating” from a training program sponsored by the military charity Segs4Vets.

Although two such graduation ceremonies have taken place here every year for the past couple of years, this is the first in which the Arlington Police Department is playing an integral part.

ACPD, which has 12 officers trained to operate the department’s six Segways, helped train today’s recipients, and helped assemble and transport the 51 Segways that are being given away. County motorcycle officers are also helping to escort the group between the ceremony and meals at Army Navy Country Club today.

It’s a partnership that Segs4Vets and the police department hope to extend.

“Here was a way to reach out to the community,” said Capt. David Herbstreet, one of the overseers of the department’s Segway program. “How can you say no? This is an awesome cause and we’re humbled and honored to do it.”

The officers involved in the training all volunteered for the program.

“It’s a wonderful relationship that we’re really excited about,” said Mike Kelly, who serves on Segs4Vet’s advisory board.

Segs4Vets has given away 525 Segways to severely injured Iraq and Afghanistan veterans nationwide since 2005. The organization says the device gives wounded vets an additional degree of freedom and mobility while not drawing attention to their disability.