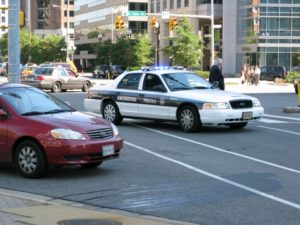 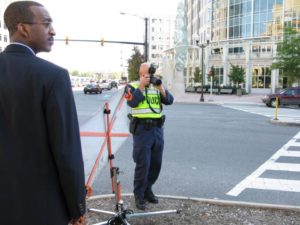 (Updated at 2:15 p.m.) A pedestrian was struck by a car at the intersection of North Glebe Road and Fairfax Drive just after 1:00 this afternoon.

Bystanders who witnessed the aftermath of the accident say the victim was an older man. He was bleeding from the face when police arrived on scene, but was conscious and was able to sit up before being loaded onto an ambulance, they said.

After the man was taken to the hospital, emergency personnel hosed down the road to wash away the blood.

There was no visible damage to the striking vehicle, a red Toyota. It’s not clear whether the man was crossing the street in a crosswalk when he was struck. A police officer was taking photos of the scene about a half-hour after the accident.

This is the second pedestrian accident on that particular block of Fairfax Drive so far this week. A pedestrian was injured in a two-car accident that also knocked down a light pole on Tuesday.