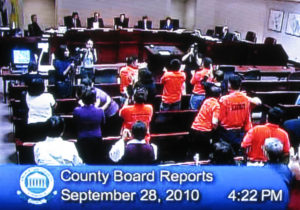 At the board’s behest, Arlington County Manager Barbara Donnellan sent a letter to U.S. Immigrations and Customs Enforcement Director John Morton yesterday, seeking clarification on whether Arlington can withdraw from the Secure Communities program, and, if it can, how it may do so.

“We need to ask him to clarify this conflicting information we’ve been getting,” county board member Walter Tejada said in a telephone interview last night. He was referring to a recent Washington Post article that suggested communities will not be able to opt-out of the immigration enforcement initiative, as the county board had been led to believe.

“Once we have that clarification, and we better understand what else we need to be asking, we’re going to go from there,” Tejada said.

The board’s effort to opt-out of Secure Communities received a public endorsement this week when the New York Times ran an editorial calling on the Obama administration to accomodate the request. San Francisco, Santa Clara, Ca. and the District have also expressed interest in opting out of the program.

“Washington needs to find a way to allow cities like San Francisco and Washington to enforce the law without turning into a branch of ICE,” the Times said.

“This is the practical effect of an anti-immigrant policy masquerading as a crime issue,” Zimmerman said of Secure Communities, which has helped the federal government deport a record number of illegal immigrants over the past year. He said the Obama administration-endorsed policy “challenges our commitment to our core beliefs” and “make[s] our communities less secure.”

Tejada, who championed the resolution calling for Arlington to opt-out of Secure Communities, said the program actually hinders law enforcement by causing the immigrant community to disengage from public authorities.

“We’ve had a long, successful history of community policing,” he said. “We want to maintain that trust between the community and the police… so we can continue to report crimes and so people who are victims of crimes can step forward and report it.”

Mark Kelly, the Republican who is trying to unseat Zimmerman on the county board next month, said last week’s unannounced vote on the Secure Communities resolution did not receive the proper public scrutiny.

“That’s not the Arlington Way,” he told the Sun Gazette.