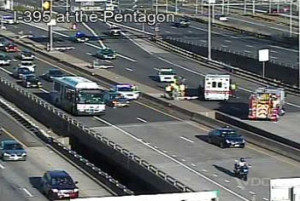 A motorcyclist was injured after wiping out on I-395 around 8:00 this morning.

The accident happened in the southbound HOV lanes of I-395. Police on the scene reported that the man had taken out at least one of the gates used to prevent traffic from going the wrong way on the combined HOV lanes.

The extent of the man’s injuries are unknown. A repair crew from VDOT has been dispatched to repair the gate.

The motorcycle was described as a black Harley-Davidson with a West Virginia license plate.