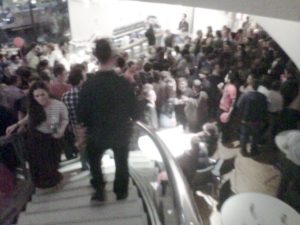 On the eve of its VIP ribbon-cutting ceremony, hundreds of twenty-somethings packed into Artisphere, the county’s new $6.7 million cultural center, to drink, dance, party and enjoy some art.

Sponsored by the web site Brightest Young Things and Pink Line Project, an arts advocacy organization, Burst @ Artisphere was billed as the hipper, cheaper counterpart to Friday’s $250 per ticket opening gala. True to the billing, the evening attracted a hipster-heavy crowd that looked a bit out of place in stodgy, corporate Rosslyn. Organizers helped lure party-goers from their safe, comfortable DC environs with regular shuttle bus service from Dupont Circle and with the promise of free beer and wine (after the $20 cover).

Once inside, Artisphere’s two-floor Wi-Fi Cafe was filled to the brim with beautiful and/or interesting people, all conversing loudly. Pabst Blue Ribbon and Beringer flowed freely.

The artist Katie Laibstain (a.k.a. Katie Balloons) held court near the stairs on the second level, wearing an elaborate balloon costume that allowed her to occasionally pose as an inanimate object, only to pop up and scare unsuspecting hipsters. Ms. Balloons would later make her way to the ballroom, where a crowd energized by the beats of DJ Chris Burns proceeded to rip apart her costume, wearing Laibstain’s former balloon arms and balloon headgear as a primitive hunter might wear a slain animal’s pelt. The sounds of popping balloons were ever-present for the rest of the night, as parts of the costume were passed from person to person.

Aside from Lord of the Flies-esque balloon destruction, the ballroom was also the scene of at least one breakdancing competition, as well as numerous make-out sessions.

In other parts of Artisphere, where the PBR cans were verboten, actual art was being viewed and created. The Family Hemerlein Variety Show brought music and comedy to one of Artisphere’s three theaters. Elsewhere, in one of Artisphere’s studios, a mustachioed man was riding skateboards over canvases and fresh paint, making art out of the resulting multicolored tracks. A lone middle-aged man in a sports jacket, standing to the side, mused enthusiastically that it would be neat if Tony Hawk were to be involved with the project. The skateboard artist politely agreed, while the other twenty-somethings in the room rolled their eyes.

Meanwhile, a two-story projection on the wall beckoned attendees to email their cell phone photos to a certain address, which would then automatically display the snaps for all to see. Thanks to one prankster, this resulted in the first and perhaps the last time that a graphic drawing of a part of the male anatomy would go on display at Artisphere.

When the night concluded around 2:00 a.m., Artisphere staff were left with the unenviable task of making the place sparkly and new again in time for the bigwigs to cut the ceremonial ribbon later that morning.

“If the bathrooms are any indication of how much cleanup there is to do tomorrow, I feel bad for the staff of the Artisphere,” TBD arts writer Maura Judkis tweeted.

With the ribbon-cutting completed, Artisphere held a two-day open house, which allowed members of the public to tour the facility for free, albeit with less alcohol-fueled enthusiasm.

Tonight at 7:30 p.m., Artisphere (1101 Wilson Blvd) will host the first of its weekly salsa dancing nights. Tickets are $20, or $15 with a student ID. Feel free to wear balloons as part of your outfit, it should be safe this time around.