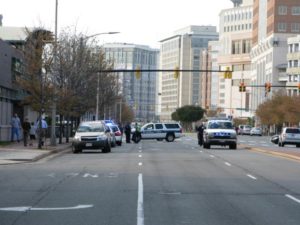 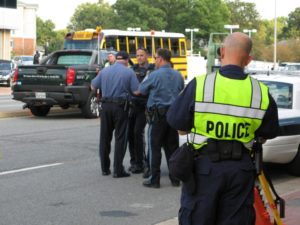 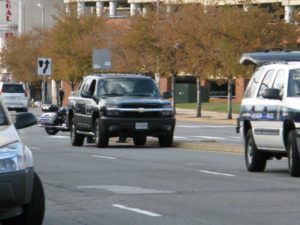 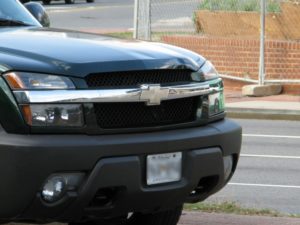 A serious pedestrian accident has shut down all lanes of Glebe Road between North Carlin Springs Road and North Henderson Road, near Ballston Common Mall.

A pedestrian was struck by a vehicle on Glebe Road and was taken to a local trauma center, according to Arlington police spokesperson Det. Crystal Nosal.

Update at 4:20 p.m. — The northbound lanes of Glebe Road have reopened. Traffic heading northbound from Glebe and from North Randolph Street is being allowed to enter the Harris Teeter parking lot.

Update at 4:30 p.m. — An accident investigation is underway. Police with surveying equipment are taking measurements and detectives are taking photos of the striking vehicle, a large commercial Chevy pickup truck with Maryland tags.

Witnesses tell ARLnow.com that the victim was a younger man, possibly a young father, who had just left Harris Teeter with a bag of diapers. The man’s injuries appeared to be life-threatening, witnesses said. Multiple witnesses said the man may have been trying to cross the intersection of Glebe Road and Randolph Street against the light.

Update at 4:50 p.m. — The striking vehicle has been taken away by a tow truck. One southbound lane of Glebe Road has been reopened.