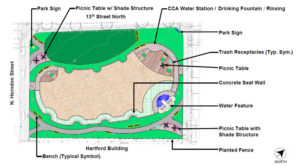 The Clarendon dog park soon won’t be just for the dogs any more. The park at Herndon Street and 13th Street is set to receive a $1.7 million face lift over the next year and a half. The project will transform what is essentially an open field adorned with plastic lawn chairs into a sleekly-designed green space that will be part dog park and part “person” park.

That is, unless the park bond fails in November.

All but $350,000 of the park’s funding relies on voters passing a $5.975 million park bond next month. If the bond fails, a new, piecemeal construction plan will likely need to be conceived.

“We would have to regroup and figure out how to proceed,” said Scott McPartlin, an urban planner with the county. “I don’t think anyone has the answer to that at this point.” 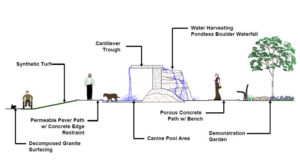 The current plan for the new park includes benches and picnic tables, a water feature, a demonstration garden, planed trees, solar panels to power a portion of the park’s features and a water reclamation system.

If the bond is passed, McPartlin expects construction to begin in late spring or early summer of 2011, to be completed by spring of 2012.

The county is currently conducting an online survey to determine a name for the park. With the exception of “Companionship Park,” the name choices — “James Hunter Park,” “Merchant’s Park,” “Nesmith Park,” and “Wheeler Park” — each have historical significance for the area.

Update at 12:45 p.m. — McPartlin clarifies that the $350,000 in funding already secured will go toward the dog park (in county parlance, a “community canine area”). The $1.3 million from the park bond will be used for the other improvements. Regardless of whether the bond passes, McPartlin says, the community canine area portion of the plan will move forward.