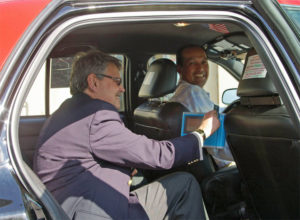 Soon, playing for a cab ride in Arlington will be as simple as swiping your credit card. Red Top Cab has started the process of installing self-pay machines in the back of each of its 350 taxis in Arlington.

In a press release, Red Top says it’s the first local cab company to fully implement the technology — which is widely used in cities like New York City, Boston and Chicago.

“Customers are very enthusiastic,” about the self-pay machines, according to driver John Svay. “Customers see their fare charges right in front of them, and can swipe the card before arriving at their destination… itʼs quicker and easier than the old way.”

Red Top expects the machines to be installed in all of its vehicles by the end of November.