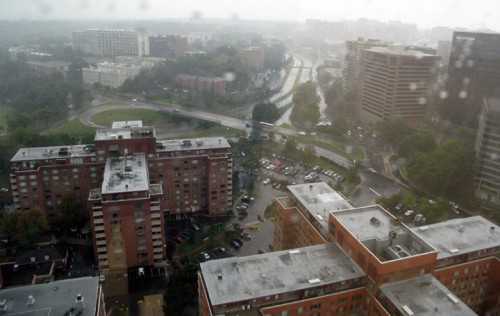 Sushi Rock Decision Deferred — The county board deferred its decision on whether to grant Sushi Rock (1900 Clarendon Blvd) a live entertainment permit until November, to allow more time for community input. At yesterday’s board meeting, neighbors complained that the restaurant is already so loud that it keeps them up at night. Sushi Rock management told the board that they’re losing money while waiting for the permit, which would help develop more late night bar business. More from TBD.

ACE Holds “Hallowgreen” Gala Tonight — Arlingtonians for a Clean Environment is holding its cleverly-named Halloween gala tonight on the Pike. There will be a costume contest, a silent auction and a concert by the band Trees on Fire. Tickets are $50. The event is being held from 7:30 to 9:30 p.m. at The Salsa Room (2619 Columbia Pike).

New Mobile Visitors Center to Debut at Marathon — Arlington’s new electric-powered Mobile Visitor Center will be making its debut at the Marine Corps Marathon Health and Fitness Expo in the District on Friday. The county says the visitor center is “a fully customized ‘green’ vehicle that will serve visitors in the County’s urban villages and at major tourism events. ” More from Arlington County.