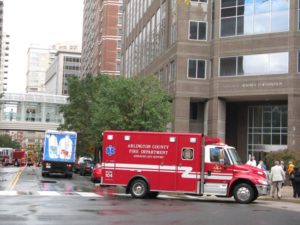 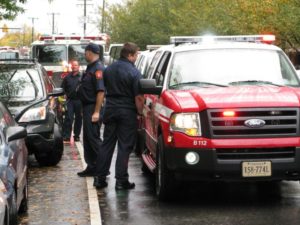 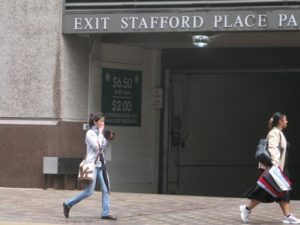 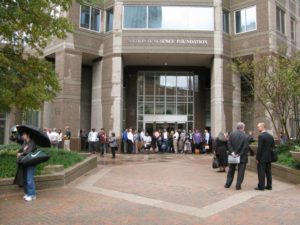 The National Science Foundation building at 4201 Wilson Boulevard in Ballston was evacuated after an apparent lightning strike caused an electrical fire.

At least one witness reported hearing a popping sound as power went out. Rancid-smelling smoke spilled out of the building’s parking garage as a large fire department response surrounded the building.

While firefighters investigated the smoke, dozens of office workers stood outside in the light rain, waiting for the building to be reopened. Fire equipment blocked the westbound lanes of Wilson Boulevard.

There are reports that another building across the street was evacuated due to the smell of smoke. Firefighters believe the smoke was coming through an underground tunnel from the NSF building.

Much of Ballston, including Arlington Central Library, is currently without power.

Update at 2:20 p.m. — Most of the fire crews at the NSF building are packing up their gear. The actual fire investigation seems to be on the P2 level of the NSF parking garage.

Update at 9:10 p.m. — From NSF spokesperson Dana Topousis: “The National Science Foundation (NSF) will be closed on Thursday, October 28, due to a power outage. Employees are encouraged to check NSFAlert.com for updates.”

Update on 10/28 — Dominion’s Le-Ha Anderson sheds more light on why the NSF building is closed here.