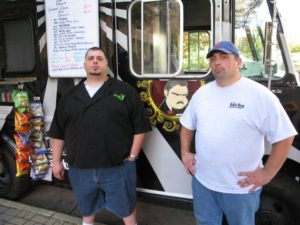 Today is the first day in business for Bada Bing Cheesesteaks and Spiedies, a new Arlington-based food truck.

What is a Spiedie, you ask? It’s an upstate New York delicacy — a sandwich made with marinated meats cooked over an open flame.

While the truck’s name doesn’t exactly convey an aura of culinary sophistication, the man behind Bada Bing is Nicholas Terzella, a trained chef whose resume includes fine dining restaurants in Napa Valley and Palm Beach.

Terzella, who has also worked as a private chef for an actress in Manhattan (he won’t name names), says he will be serving gourmet seasonal side dishes in addition to sandwiches. Needless to say, it’s not often that you hear the words “truffle oil” uttered by a tough-looking guy selling cheesesteaks out of the side of a truck.

Terzella, a Centreville resident, says he’ll be operating the truck as a full-time business in Arlington, though he’s hoping to eventually start selling in the District once the DC government starts issuing vendor licenses again.

Bada Bing will be stationed outside the Virginia Square Metro station tonight and tomorrow. Next week the truck will start on a regular rotation around Ballston, Clarendon, Rosslyn and Crystal City.