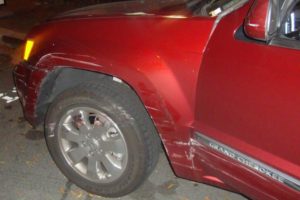 Another witness has come forward with additional details about the accident involving the Patrick Murray for Congress campaign bus in Old Town Alexandria. At the same time, however, the woman whose Jeep was sideswiped by the bus says she’s ready to move on.

Barbara Reeder, the Jeep’s owner, says she’s very happy with the way the Murray campaign handled the incident in the hours after our story was published.

“Patrick Murray’s office was just delightful to work with,” the New Jersey resident said, in an unsolicited phone call to ARLnow.com. “I thought they were very responsive.”

“I would hate to see this be a political issue,” she said.

Meanwhile, another witness has shed more light on what happened immediately after the accident, which Alexandria Police say they’re investigating as a possible hit and run. 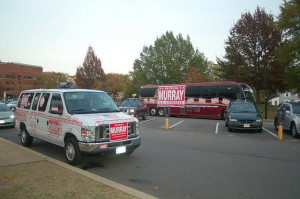 The witness, who did not want to be identified, said he was behind the bus when its rear end scraped against the Jeep. He said he and his wife managed to pull over a Murray campaign van several blocks away to tell campaign workers and the apparently unaware bus driver what had happened.

At that point, he said, an Alexandria police officer pulled over and talked to the witness and the campaign staff. A Murray staffer said they would go back and check for damage, and the officer drove off, according to the witness.

The bus remained parked in the same place for at least 10 minutes, said the witness, who then went along with his business. He did not know whether anyone from the campaign left a note on the Jeep.

Alexandria Police spokesperson Jody Donaldson says the case has been turned over to the office of the Commonwealth’s Attorney, which will decide whether or not to pursue charges. Donaldson was not able to elaborate on the circumstances of the accident.