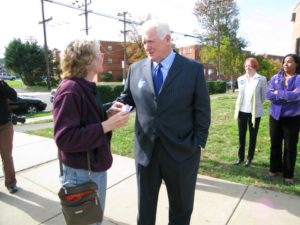 The ten-term Democratic congressman was shaking hands with voters as they went to the polls, asking for their support. It was one of the final few stops in his campaign to win an eleventh term.

Moran, who voted in Shirlington, had visited the Lyon Village, Lyon Park, Gunston, Woodlawn, Washington-Lee and Jefferson precincts in Arlington earlier in the day. He was planning to keep going in Mt. Vernon and southeast Fairfax County until polls closed at 7:00 p.m.

Moran admitted to being a bit nervous, as he is on every election day, but said that the busy schedule of stops at polling centers helps to “work off the anxiety.”

A campaign staffer expressed confidence that turnout in Arlington was going their way. They were seeing higher turnout in South Arlington and along the R-B corridor, the staffer said, and lower turnout in the more conservative parts of North Arlington. At the time, no turnout information was readily available for other parts of the district. 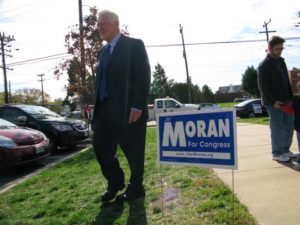 Joining Moran at the recreation center were his four children: Jim, Patrick, Mary, and Dorothy. They stood around, speaking to the volunteers outside the center, but mostly let dad chat up the voters.

The show of family solidarity was unsurprising. The congressman’s children have been protective of their 65-year-old father at points during the course of the campaign.

In one ambush-style video posted by the campaign of Republican challenger Patrick Murray (fast forward to 1:20), Mary Moran, who formerly worked for the NFL Players Association, tries to get the cameraman to leave while Rep. Moran fumes in the background, apparently in response to a question.

“Go away, go away, because dad won’t do anything to you… it’s wildly inappropriate for you to do this,” she said, her voice laced with emotion.

Yesterday, a report surfaced that one of Moran’s sons may have intervened in a verbal argument between the congressman and a Murray campaign volunteer. That encounter has not been independently confirmed, and both sides have their own version of the story.

Other members of Moran’s sizable Irish Catholic family, meanwhile, were helping out in various parts of the district this afternoon — applying a full-court family press.

While Moran handily beat his Republican opponent in 2008, a year when Barack Obama helped drive Democratic turnout, 2010 is turning out to be more difficult.

“I think this is the toughest one for Democrats in a long time,” Moran said. He credited the GOP’s ability to blame the county’s woes on Obama, even though many are “residual effects of the Bush administration.”

A short time later, a taxi driver stopped his car in the middle of the street upon seeing Moran.

“I love you very much,” the driver shouted, with a thick accent.

The congressman’s smile, which had seemed fixed in place, broadened.