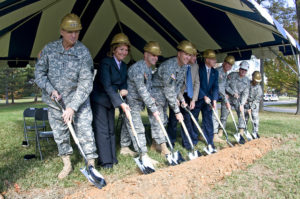 Earlier this week, the military broke ground on a new building in Fort Belvoir.

The $19.6 million, 88,000 square foot facility will house the Office of the Chief, Army Reserve (OCAR), which is currently housed in leased office space in Crystal City.

Once the new facility is completed, the office and its 400 employees will move out of Crystal City and in to Fort Belvoir.

It’s just one of dozens of such moves that will be taking place over the next 10 months as the result of the Base Realignment and Closure Act of 2005. A few BRAC moves have already taken place, but most of the 17,000 BRAC-affected workers in Arlington are still here.

“This event marks a significant milestone in the BRAC timeline and journey,” said Joyce Morrow, an assistant to the Secretary of the Army, at the groundbreaking.

By law, the BRAC moves must be complete by Sept. 15, 2011. That will mean a lot of people leaving Arlington — particularly Crystal City — next year.

“There are 317 days left until the BRAC deadline when all of the [OCAR] personnel must be here at Fort Belvoir,” said Col. John Stycula, an official at Fort Belvoir. “With that said, let’s get digging.”