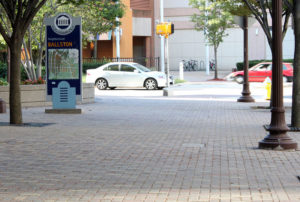 Rosslyn and Crystal City are doing it. Now Ballston wants in on the action.

This weekend a group of large local property owners will ask the county board to advertise a public hearing on the creation of a Ballston Business Improvement District.

The Ballston BID would be responsible for marketing Ballston to potential businesses, residents and visitors. It is necessary, property owners say, to keep Ballston competitive with other fast-growing commercial office markets in the District and in Northern Virginia. (Such as Tyson’s Corner, which is a few years away from becoming Metro-accessible.)

“The common view is that Ballston is a ‘good’ place but, it is not yet a ‘great’ community — a goal all urban mixed-use communities need to achieve in order to remain competitive, attractive and sustainable,” the BID’s boosters wrote in a proposed business plan. 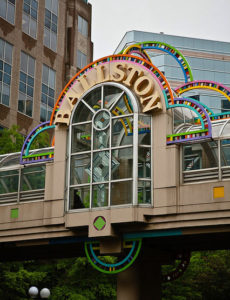 The BID, with an initial budget of just over $1 million, would focus on “improving the business climate through branding, marketing and events.”

Organizers say the BID would be similar in function to the Crystal City BID, which has been very active in beautifying the streets, working to attract new businesses and organizing events meant to showcase various desirable neighborhood characteristics.

Ballston BID supporters propose spending $186,000 on events, $205,000 on marketing and branding, and $300,000 on signage, including banners, a “gateway” and navigation aides. The BID would also create a new “fully interactive website.”

A large part of the BID’s mission will be to “enhance and sustain Ballston’s image as a premier live-work-play community.”

A common complaint about Ballston is a lack of reasons to stay past 5:00 p.m. on weekdays or to visit on weekends. As such, the BID would take steps to promote the neighborhood as “a place where visitors and employees will stay longer and enjoy the BID’s after-work and weekend energy.”

Under the BID, Ballston would be branded as the Washington area’s “hub of science and technology” — emphasizing the presence of the National Science Foundation, DARPA, the Virginia Tech/IBM Center for Community Security and Resilience, and other sci-tech employers.

The BID would be paid for by a supplemental commercial property tax rate of $0.045 per $100 of assessed value in a designated Ballston service district. The tax would not apply to properties deemed “residential.”

The creation of the BID and the tax have the explicit support of half the property owners and managers in Ballston, according to organizers. Only 14 percent of property owners, including the Nature Conservancy and the National Rural Electric Cooperative Association, oppose the BID’s creation outright.

If ultimately approved by the board, the BID would begin operations in July 2011. It would likely replace an existing neighborhood organization, the Ballston-Virginia Square Partnership, which “lacks the financial resources to help make Ballston the ‘great place’ that it can be,” according to BID boosters.