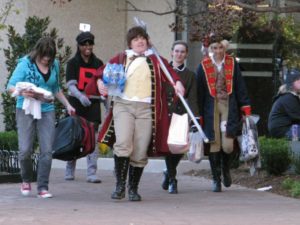 (Updated at 4:35 p.m.) The annual Anime USA convention has brought scores of, er, colorful characters to the Hyatt Regency in Crystal City.

The convention, which ends on Sunday, features bands, workshops, celebrity meet and greets, concerts, a Japanese marketplace and more. Between 3,000 and 4,000 people, mostly younger, are expected to attend.

Samantha Burke, who along with four family members traveled here from North Carolina in a decorated white van, said Anime USA is a “celebration of Japanese culture.”

Almost as interesting as watching the sea of costumed humanity standing outside the hotel is watching the reactions of unsuspecting passersby. Taxi drivers, office workers, hotel guests not affiliated with the festivities — all crane their necks.

“Wow,” said one woman, gawking from the sidewalk. “All I can say is wow.”

The crowd frightened at least one citizen, who called police earlier today when she thought something was amiss. One officer told us that in years past, police have been called when convention-goers with fake guns or samurai swords have walked into banks or restaurants.