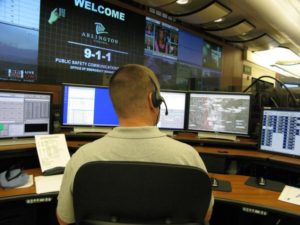 (Updated at 3:45 p.m.) At some point in the future, Arlington residents may be able to text 911 to receive emergency help.

“The current 911 system is efficient and reliable… but [it] doesn’t support the communications tools of tomorrow, Genachowski said, pointing out that 70 percent of all 911 calls now come from mobile phones.

“With today’s advances in commercial mobile broadband technologies, consumers are using their phones less to make calls and more for texting and sending pictures… but right now, you can’t text 911,” he added. “It’s time to bring 911 into the digital age.” 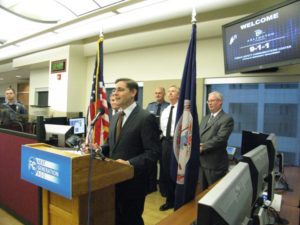 Genachowski cited the 2007 shootings at Virginia Tech as an example of why a the new technology is necessary.

“Some students and witnesses tried to text 911 during that emergency,” he said. “Those messages never went through and were never received by local 911 dispatchers.”

In addition to emergencies where speaking to a dispatcher could jeopardize a caller’s safety, Genachowski said 911 texting systems could help in other situations.

“Next generation 911 could allow a caller to transmit a photo of a car leaving the scene of an armed robbery, [or] could enable a deaf person to communicate with an emergency call center by sending text messages to the call taker,” he said. Devices like environmental sensors, highway cameras or personal medical devices could be set up to text 911 in the event of emergency situations.

Genachowski announced that at its meeting next month, the FCC will take an “important first step” toward figuring out how to roll out next-generation 911 nationwide. No time frame was given for the technology’s implementation.

Next-generation 911 technology has been tested out in at least one jurisdiction, but is not currently in place anywhere in the country, according to FCC Public Safety and Homeland Security Bureau Chief Jamie Barnett. Implementing the system across the country will require a “coordinated team effort” between lawmakers, public safety agencies and communications companies, Barnett said.

Scott cautioned that next-generation technology will need to be accompanied by an increase in staffing at 911 call centers. Without more personnel on hand, call centers such as Arlington’s “could be quickly overloaded” when confronted with a flood of text messages during an emergency, Scott said.

Scott added that he did not think the 140 character limit on text messages would be a hindrance to dispatchers.

Arlington’s Emergency Communications Center handles more than 1,400 emergency and non-emergency calls per day, according to 2010 statistics.