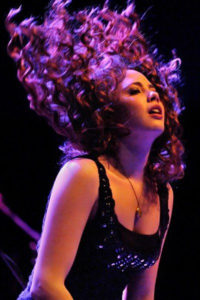 For now, Margot MacDonald is a 19-year-old with an incredible voice and undeniable songwriting talent who lives with her parents in Lyon Park. Given her steady ascent in the world of music, however, it’s hard to see how that last part is going to last long.

MacDonald, who is playing IOTA Club (2832 Wilson Blvd) tonight with two fellow Strathmore Artists in Residence, seems destined for bigger things. A five-time Washington Area Music Award winner, MacDonald received “a little bit” of national recognition in the past year, when her self-funded album, Walls, made a list of possible GRAMMY nominees for Best Album of the Year.

Walls was actually the teen’s third album. Her first came out when she was 12, about three years after she started classic opera training. During her young career, MacDonald has veered from very folk-oriented to “completely hard rock” to what she now describes as “pop acoustic rock with a bit of a world influence.”

She has worked with two noted local record producers, including fellow Lyon Park resident Marco Delmar. But until now the former Long Branch Elementary and Kenmore Middle School student has shrugged off interest from labels.

“I haven’t felt particularly ready up until this point… I’ve just been trying to figure out who I want to be as an artist,” she said. But MacDonald says she now feels more comfortable than ever with her own musical style, and might be ready to make the leap to the big leagues of the music industry.

Earlier this month MacDonald, who has performed at the 9:30 Club and the Kennedy Center’s Millennium Stage locally, played her first show in New York City. She says she’s anxious to go back.

“I’m really happy with what I’m doing… slowly but surely getting better and better gigs and gaining more fans,” she said. “I’m not really sure what the future holds, but I hope it’s good.”

Check out Margot’s YouTube channel to watch her past performances.