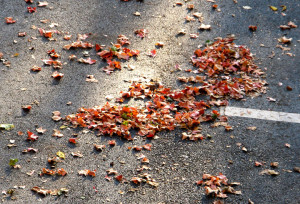 (Updated at 3:00 p.m.) A homeowner in the Woodmont neighborhood has been charged with assaulting a county leaf truck driver.

Police say Kevin Love, 46, was upset that the leaf truck vacuum didn’t pick up all the leaves on his street Saturday morning. Some sort of verbal dispute ensued, according to police spokesperson Det. Crystal Nosal. Love is then alleged to have punched the driver.

He was subsequently charged with assault and battery and released on a summons.

In an email to ARLnow.com, however, Love says the assault allegations are false.

“I was not arrested,” he said. “I never punched or touched this county employee, ever. There was a verbal dispute after this employee made a discriminatory remark directed at me, but that was the extent of it.”

“I now have to go to court over a out and out lie,” added Love, a local real estate agent. “This has been a very humiliating and damaging attack on my character.”

The county’s Department of Environmental Services said the leaf collection employee reported the incident to a supervisor. The situation is being handled as a “personnel matter,” according to a spokesperson.

How might the situation have been handled better? The county has a leaf collection hotline that residents can call to request a second pass. The phone number is 703-228-6565.